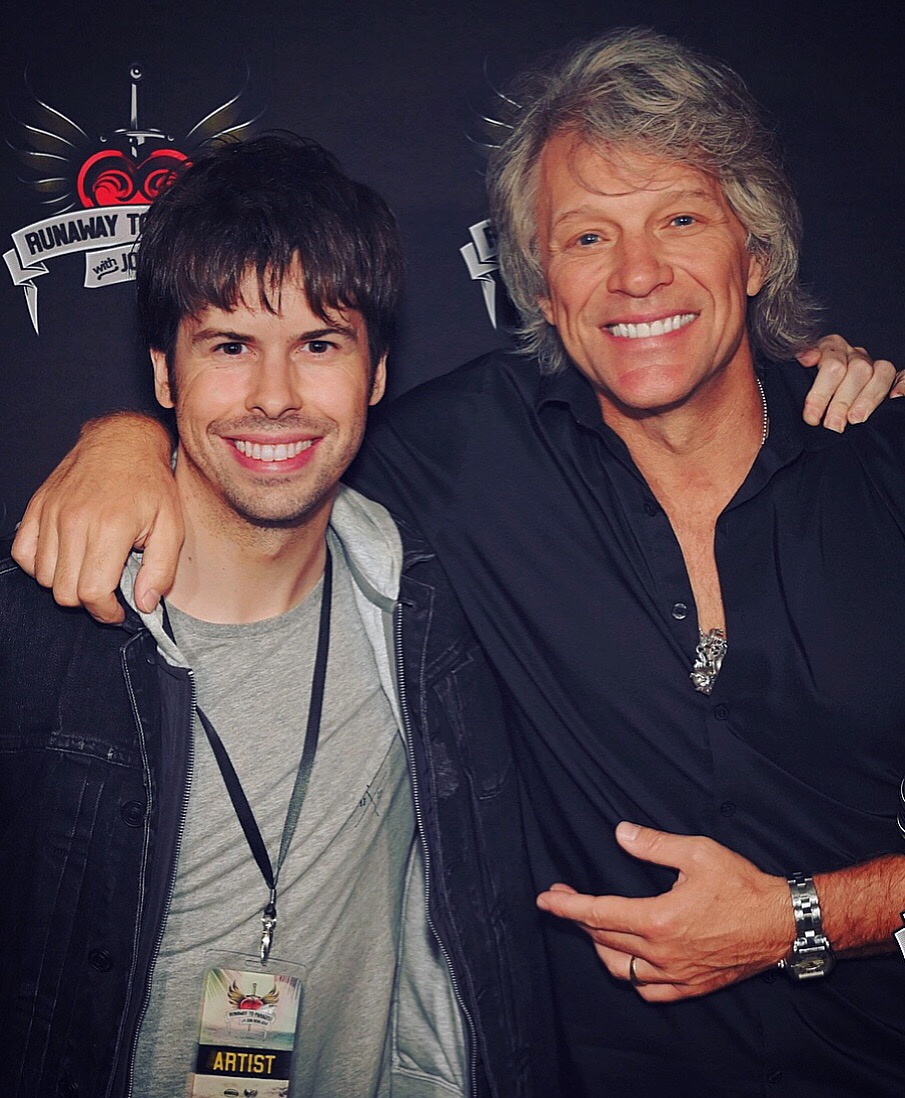 The rock star set up a week-long super musical cruise through the Mediterranean as part of his tour of Europe.

The Spanish Antonio Rivas, with 3 concerts of 75 minutes each, joined Goo Goo Dolls and Grace Potter as guest artists.

Antonio Rivas, singer, guitarist and composer, has shared a week full of experiences and concerts with the world star and one of the great icons in the history of rock, Jon Bon Jovi, who has chosen the Spanish to be his artist invited in 3 concerts throughout his tour of the Mediterranean.
Antonio, declared a fan of Bon Jovi whom he could meet and talk to, expressed the kindness of the New Jersey star, as well as his surprise at Jon Bon Jovi’s interest in Antonio´s music and talent, which delighted the audience with 3 concerts own more than an hour each. For his part Jon Bon Jovi, also performed 3 concerts, in his case two acoustics with a Q&A included and one with band.
Additionally, Antonio Rivas also shared moments with Goo Goo Dolls star Johnny Rzeznik, known for his hit “Iris” (18-week record as # 1 on Billboard Hot 100).
The audience vibrated with the performances of Galician, sang their songs and it was not strange to see Antonio Rivas t-shirts throughout the Norweigan Pearl. And Antonio Rivas does not stop receiving praise. This time it was Jon Bon Jovi and previously, Antonio was also a guest artist at concerts of the international Marc Ford (The Black Crowes) and 2 Cellos.
The composer of “Por Ahí” is that he goes out and does not stop surpassing himself based on effort, talent and perseverance.
His first single “Por Ahí” reached #1 spot on iTunes in Spain the week of its release above artists such as Ed Sheeran, Bruno Mars, Justin Bieber or Adele, and the music video of it, filmed in New York, exceeded 250,000 views in just one week on its YouTube channel and already accumulates more than 750,000 views.
His first album also called “Por Ahí”, composed, produced and performed entirely by Antonio Rivas himself, also reached the top on iTunes and Antonio had the participation of engineers “Caco” Refojo (4 Grammy awards) and the prestigious Ryan Smith (known for his work with Aerosmith, Beyoncé, Rihanna, AC / DC, etc.) at Sterling Sound studios in New York.
After the release of his first album, Antonio Rivas embarked on a “Por Ahi Tour” tour that took him throughout Spain: Caracol and Galileo Galilei (Madrid), Razzmatazz (Barcelona), Capitol (Santiago de Compostela), etc, and for the United States, acting in theaters like the legendary Whiskey A Go Go in Los Angeles (California). Also in festivals such as the prestigious “Nights of the Botanist” in Madrid on the same stage as Patti Smith, Robert Plant, The Lumineers or Seal.
Antonio Rivas is currently in the process of recording his second album, which will be released this 2019 and in which he is surrounded by several of the great musicians and engineers internationally.

Antonio Rivas’s live show stands out for his energy, his torn voice and a spectacular ability with the guitar, where his solos are protagonists.
This collaboration with Jon Bon Jovi, only confirms the meteoric career of the Galician artist as one of the great exponents of national pop-rock and one of the great guitars of our country.